Trying to be a more successful catfisherman? Try out the baits on this list to increase your success rate.

Catfish are found throughout much of the central and eastern United States. Catfish anglers tend to target 3 different species when fishing in U.S. waters. The flathead, channel, and blue catfish. Catfish have the stigma of being lethargic scavengers. While they are opportunistic feeders, they are also capable predators. Catfish also have some of the stronger taste and smell senses among freshwater fish [1].

In this list, we will discuss the best baits to target the catfish in your local waters. Catfishing does not have to be hard. Try not to over complicate the baits you are using. In many situations, simple baits you can buy at a big box store will be enough to help you bring home a stringer full of catfish. Let’s take a look at the best baits for catfish.

Let’s start with worms. They are a great bait for most any fish you are targeting, but especially catfish. Worms can be obtained without spending a single dime. You can look under logs, debris, and other things at your house and usually find a handful of nightcrawlers or red wigglers. I’ve seen serious catfishermen set up their own worm beds to ensure they have a population handy any time they want to hit the water. If that is not your desire, you can always pick up a container of worms at the local store. Worms are a great catfish bait, but be aware that they will also attract other types of fish and turtles local to the waters you fish.

If you live in the south, you may also have the luxury of having some catalpa worms handy. Catalpa worms grow to be about 3 inches long and can be found on catalpa trees from May – July. If you can get your hands on these yellow and black worms, consider yourself lucky. They are said to be one of the best baits for targeting catfish due to their flavor. If you collect more than you can use, don’t worry. You can freeze the worms for use later in the season.

Like worms, with a little work you can obtain baitfish without spending your hard earned cash. You just need to have a cast net or minnow trap handy. Popular types of baitfish include shad, perch, and bream. The key to fishing with baitfish is to match the hatch. Previous articles have discussed matching the hatch, and the importance cannot be downplayed here. Take the time to see what the fish are feeding on. It may be shad as they are schooling in the spring. Be patient and when you have caught the bait, present it naturally.

If fishing for keeper size catfish, keep your baitfish on the smaller side (2-3 inches). When fishing for trophy size cats, up the size of your baitfish. Also be mindful of the water you are fishing in. Fish live baitfish in still water and dead baitfish in fast moving waters such as rivers. This is because movement is key in the still water lakes and ponds. Scent is much more powerful in the moving waters of the rivers.

As a kid, I used chicken livers when fishing for catfish more than any other bait. You can just look at a chicken liver and tell it is something that a catfish would love. Many anglers have begun switching to rooster livers instead. The rooster liver is tougher, and for that reason, stays on the hook better. If you are having trouble keeping the liver on the line, try using some panty hose wrapped around the liver. It sounds crazy, but I have personally used it with great results.

There are a couple ways that chicken livers can be rigged. They can be rigged on a bobber and off the bottom, or they can be weighted and fished from the bottom. Either way can be successful and it just depends on personal preference. When going out on a hot day on the water, try freezing the livers the night before the trip. This will ensure that they do not get too runny and will hold together better throughout the day.

Unlike the other types of baits we have discussed, stink bait will not attract other species of fish. Chances are when you get a bite with stink bait that it is a catfish. This makes it a popular choice in waters where competition among species is common. Stink baits routinely come in a dough form. This makes it a challenge to keep on the hook when casting. If you’ll remember the solution to that problem for chicken livers, it could come in handy here. Just take a piece of panty hose or stocking and wrap it around the bait before placing it on the hook. Just like that you have guaranteed better castability with stink bait.

The best opportunity to use stink baits come in moving bodies of water. Rivers and creeks provide the stink bait’s scent the opportunity to drift downstream and pick up the attention of any catfish nearby. Warm water also provides an enhanced opportunity for stink bait. The temperature allows the scent to spread more easily, which will more than grab the attention of nearby catfish. Try stinkbait during the dog days of summer on the creeks or rivers in your area and see what kind of cats you’re able to reel in.

It may sound crazy, but hot dogs are some of the best catfish bait you can use. I have personally seen some 10+ pound catfish caught off of hot dogs. My favorite way to rig hot dogs is on a circle hook. The circle hook allows the fish to hang itself. That means that you can leave the line in the water and return later to see how you have fared. You may find that hot dogs don’t tend to stay on the hook very well. If that is the case, try using beef wieners. I have found the beef variety to be tougher and easier to cast.

Try using hot dogs during the spring and summer when the heat begins to turn up. That is when I have found the most success, but don’t be afraid to experiment during other times of the year too. Also be aware that hot dogs can attract species other than catfish. You will also undoubtedly catch the interest of some of the local turtles. Don’t let this deter you though. Make sure to give hot dogs a try because they are seriously good catfish bait.

If you are specifically targeting flatheads, there may not be a better bait than crawfish. They are usually about the perfect size for catching good eater catfish. If you are after trophy catfish, you may want to try some of the other baits we have listed however. Crawfish can be caught most any time of the year. They are mainly found under rocks and logs, but can also be caught in a trap. Once you have caught a few, make sure to keep them alive by storing them in a cool, dry place. They will survive for quite a bit of time if handled correctly.

Crawfish, like many other baits on this list, are targeted by other species of fish. Bass, for instance, love crawfish. It is not out of the ordinary to catch great bass when fishing with crawfish. Be mindful of that possibility when rigging these critters up. Most anglers will tail hook crawfish and rig them for the bottom. This tactic allows the crawfish to look the most natural. There are numerous other ways to rig and handle crawfish. If you haven’t tried going after catfish with crawfish, give it a try and see what kind of success you can have.

Each bait in this list has its pros and cons. Unfortunately, there is no wonder bait that will always catch those big cats. Using the baits on this list when most appropriate will get you in a much more successful position however. Take the time to try them out and find out what works best for you and when. Spending time on the water and being mindful of your tactics can provide the most benefit in the long haul. Just remember to get out there and have fun. That’s what it is all about anyway. 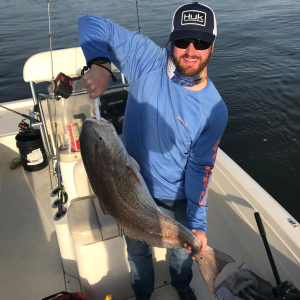 I grew up with a passion for fishing and the outdoors. Learning to fish for catfish, bass, and crappie in Georgia's ponds, rivers, and lakes at a young age. My passion continues to grow today and I want to share that love with each of you.

Save on Fishing Essentials!

Keep in mind that we may receive commissions when you click our links and make purchases. However, this does not impact our reviews and comparisons. We try our best to keep things fair and balanced, in order to help you make the best choice for you.